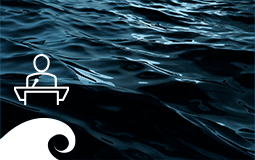 Linus Vogt – Local drivers of marine heatwaves: A global analysis with an Earth System Model. Marine heatwaves (MHWs) are periods of extreme warm ocean temperatures that can have devastating impacts on marine organisms and socio-economic systems. Despite recent advances in understanding the underlying processes of individual events, a global view of the local oceanic and atmospheric drivers of MHWs is currently missing. Here, we use daily-mean output of temperature tendency terms from a comprehensive fully coupled Earth system model to quantify the main local processes leading to the onset and decline of MHWs in the surface ocean. Our analysis reveals that net ocean heat uptake associated with more shortwave heat absorption and less latent heat loss is the primary driver of the onset of MHWs in the subtropics and mid-to-high latitudes. Reduced convective vertical mixing from the nonlocal portion of the KPP boundary layer scheme partially dampens the temperature increase. In contrast, ocean heat uptake is reduced during MHW onset in the tropics, where reduced vertical local mixing and diffusion cause the warming. In the subsequent decline phase, ocean heat loss to the atmosphere dominates the temperature decrease globally. The vertical local mixing process exhibits large seasonal variations, driving onset globally only during summer. Different types of MHWs with distinct driver combinations are identified within the large variability among events. Our analysis contributes to a better understanding of MHW drivers and processes and may therefore help to improve the prediction of high-impact marine heatwaves.

Ocean vertical velocities are several orders of magnitude smaller than the horizontal velocity field when looking at patterns larger than the sub-mesoscales, and for this reason, direct measurement in the ocean has not yet been possible. One method for estimating vertical velocity (w) field in the ocean interior is through a theoretical approach using more easily measured variables. The total Linear Vorticity Balance (TLVB: β(v_g+v_a)=f∂w/∂z) is tested in 56yr climatology from an eddy permitting OGCM to find out to what extent it explains the large-scale circulation in the North Atlantic basin and can be used to reconstruct the climatological w field. In the first part, we present a baroclinic analysis of the climatological TLVB. We find that it holds to first order within the thermocline (below the Mixed Layer), intermediate and bottom subtropical ocean when considered at spatial scales greater than approximately 7º at open ocean and 1º near the coast. Within western boundary currents, the equatorial band, and the subpolar gyre significant departures occur due to the importance of other terms in the vorticity budget such as nonlinearities or friction. We revisit the classical Sverdrup explanation of gyre dynamics by adding a baroclinic analysis of the North Atlantic thermocline major currents and water masses. In the second part, these results allow us to reconstruct w from the meridional velocity field to conclude with a discussion of similarities and discrepancies with two other existing estimates of w (one Omega Equation derived product and an ocean
reanalysis).